Day 31: Recipes of my grandmother

When my grandmother died in 1985, I managed to save her small book of handwritten recipes. Those things listed in there were not just food to me, but childhood memories.

As it turned out, it was also a stark reminder of past times. The small booklet was gifted to my grandmother (then aged 16) from her first employer upon beginning her first job as kitchen aid on May 11th 1928. She, her boss, added a small motto to the book:

In English it says "Work and don't despair". Well, you cannot say they didn't tell you what was coming. Through decades she added a lot of recipes that reflected the time of the economic crisis in 1929 and the second world war. Those dealt with questions like "How to make your own soap from bones" or "Cream replacements when there isn't even milk".

Though I managed to digitize everything, this only means that I have a digital scan. I am still working on getting all recipes in a readable form. 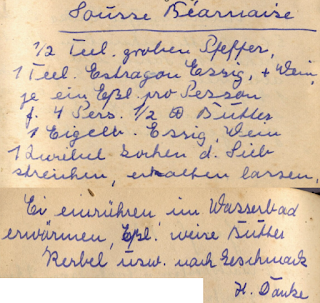 The "Sauce Bearnaise" is one of the more readable ones. Though I have it parsed, I fail how the result would end up being something close to what I know as Bearnaise.

During the time she was writing down the book, they were changing the style of handwriting here in Germany. Du to that, the recipe for "Potato Dumplings" looks completely different. 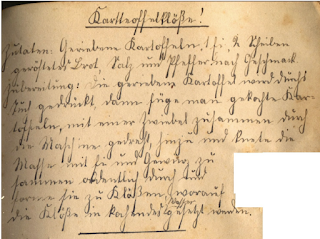 The booklet is a good reminder during the current time that we are still far away from the hardships she had to go through in her life.
Posted by Martin Seeger at 17:53