The disaster from Monday has been cleaned up, time to take care of the buns.

On Monday i was not sure, if the oven could be saved. It turned out that it was looking worse than it really was. Some of the molten plastic could be removed by hand. A glass scraper, some oven cleaner and finally the pyrolysis (I will never again by an oven without it) based self-cleaning did the trick. Though the final step again raised quite some stink in the kitchen, the result justified the means (in this case). The oven doesn't look as good as new but is much closer than I thought was possible: 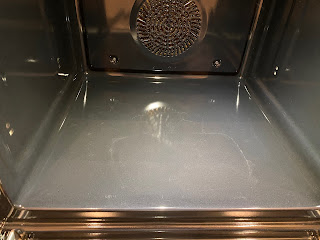 So it was time today for some unfinished business. The raw dough today has not been so good as it was on Monday (a really petty for that going to waste), but it was still much better than anything I baked before. The final results (after baking) seem to agree: 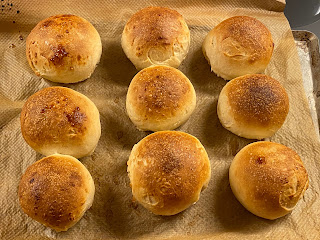 I'm sending the pictures to my baking teacher for some criticism. But the primary customer (my wife) was happy with them, so main goal was achieved.
Posted by Martin Seeger at 08:27