Excelling in one crisis might get you thrown right into the next one. And help is just 200+ millions of miles away. Your dried food requires waters that you harvest yourself from one of the most inhospitable environments known to humanity. And this is the good news section... 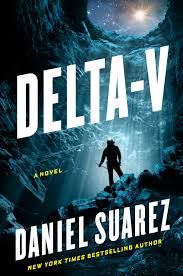 James Tighe, a cave diver by calling, has more significant problems than people being unable to pronounce his last name. Those usually involve a lack of money or air to breath. But he solved that one anyway by going by the moniker of J.T.

His rise to prominence started with guiding the quake-battered survivors of a cave expedition back to safety. His feat directly led to a party invitation by the most eccentric tech billionaire Nathan Joyce which turns into a high flying job offer. As beggars can't be choosers he accepts, also tingled by the promise of adventure.

Completing a crossover training between boot and space camp, he now tries to keep himself and his seven crewmates alive. It was promised to be hard and challenging, but that only shows Nathan Joyce has always been good at PR and secrecy. On an optimistic day, J.T. hopes that a lawyer can keep his employer out of jail long enough to book the return tickets.

The space rush will come sooner or later. Too many resources are out there that we will desperately be needed to keep our economy alive. Who will lead it? One does not require a crystal ball to see our current crop of tech billionaires in that role. What methods will they employ to reach their goals? Probably the same one they are using today.

Daniel Suarez spins his story a bit more than a decade in the future. Applying his usual thorough research, he creates a chillingly realistic description of the big gamble on economic exploitation of space. His figures get no lightsabers nor do they have a warp drive. They have to use technology that we already know to climb the cliff of Delta-v.

Delta-v is the difference between speed vectors of objects in space and determines what you can reach and what not. As the celestial bodies conduct their orbital dance, Delta-v changes, and windows of opportunity open and close. The precision with which the author researched the mathematics and physics around the implications of Delta-v is typical for this book.

Enjoyment of a novel depends for me in no small part on the suspension of disbelief. Daniel Suarez is not content with that. Instead of only suspending disbelief he tries and succeeds with implanting the positive belief that all this is possible. He needs neither magic nor future tech (only Clarke knows the difference) to do the trick.

At that point, you will notice that this book is a love child. You can google as much as you want, you will see that the author has been there long before you. It will pull you in because you know how much of this is already feasible and you want to learn what we could do.... in the positive as well as in the negative sense. It is gripping because not only the technology checks out but also the people and their social aspects. All this together tells an epic tale.

The author achieves this by throwing a lot of ethical questions into the mix. We also have a Delta-v in our society. Who decides when and how we cross the High Frontier? Shall we really leave these decisions to the Elon Musks of this world? What are we willing to do in the name of (necessary) progress?  What sacrifices do we bring and which do we expect from others? When reading the book, you explore Spock's "the needs of the few vs. the needs of the many slightly more" from several angles.

I have read a lot of Science Fiction over the years. This book can compete with the best of it.

You can find the book on Amazon.com and Amazon.de. The book will be released on April 23rd, 2019.

Full disclosure: For this review, I used a free advance copy of the book which I received from the author free of any obligation. But I am not unbiased as I consider him a friend.
Posted by Martin Seeger at 09:14 4 comments: