Very few people have had so much impact on my life as you did: my family, close friends, some teachers in school. But that's it. Together with David Weber, you're the reason I switched my primary reading language from German to English. That had a profound impact on my professional career in which a significant part of all communication is done in English. My patient's provision includes a link to a video with you. But this is only the obvious stuff. The more subtle part is an integral part of my humor and ethics, that even I cannot tell where your influence starts or ends.

KNOCK, KNOCK
"Not now! Can't you see I am talking to him?"

We met first at the university. I think Achim introduced us. When I mentioned to him, that I like Monty Python, he suggested that you and I should meet. That was during the late 80's. I just had started to roam the Fantasy circles but had not run into you yet. You baited me with a story about the most improbable sorcerer Rincewind and I took it with hook, line and sinker. I still lived at home with my parents, but you moved in with me any way. No big deal; you only needed a bit of shelf space. I could deal with that.

KNOCK, KNOCK
"Come on, give us some space here!"
"HE HAS TO COME WITH ME"

Our first meeting was in Hamburg at Kampnagel. I learned a lot from you that night. About "drunk" being the universal language of the universe, the importance of fairies in running a nuclear plants in England and how four elderly ladies plundered  an AD&D dungeon. My diaphragm was sore for days, so hard I laughed. There were a few hundred people in the room, but everyone hang on your lips, including me. Instead of giving us bits from your existing universe ("You look like students, so you can probably read yourself"), we had the impression you created another one for us.

KNOCK, KNOCK
"This is not fair!"
"THERE IS NO JUSTICE, ONLY ME"

Afterwards you spent some time with us, chatting and signing. I had a large stack of books from friends to be signed. So, when you signed the first one, I went back to the end of the queue to get the next one signed. About 50 people later, I arrived at your table again. To my complete amazement, you noticed me being there again. And you then insisted on signing all books, one after the other. 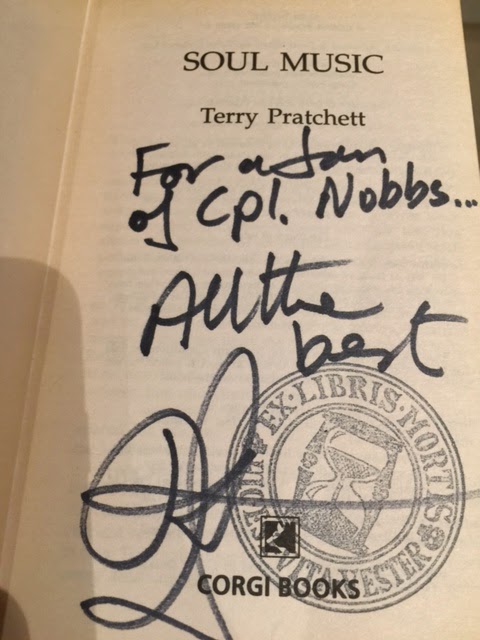 KNOCK, KNOCK
"One more thing!"
"I DIDN'T SPARE THAT ONE EITHER"

We exchanged a few emails afterwards.  You already used email at a time when it meant running a UUCP site and required using a lot of "!" to reach someone (not to confused with the use of several consecutive "!" which is a sign for a deranged mind). You posted on newsgroups long before the Internet became a fad. I always admired your patience with us, who took you as our reporter covering the Diskworld and L-Space.

You always kept your humor (the only fracture I ever noticed was when I asked you about the Maggi soup ads in your German book). We knew you were not a "jolly elf" and that the embuggerance was serious. I was dreading this day. But you came out swinging. I can only hope I am up to the same standard when MR. UPPERCASE is trying to arrange a date with me.

Farewell, Sir Terry, I thank you for all you did for me and I miss you dearly.
Posted by Martin Seeger at 11:59