Directive 51 is the first book of the Daybreak series with currently three novels. The title is derived from from the "Executive Directive 51", a Presidential Directive which claims power to execute procedures for continuity of the federal government in the event of a "catastrophic emergency". This may give you a "slight hint" about the direction this book is going. 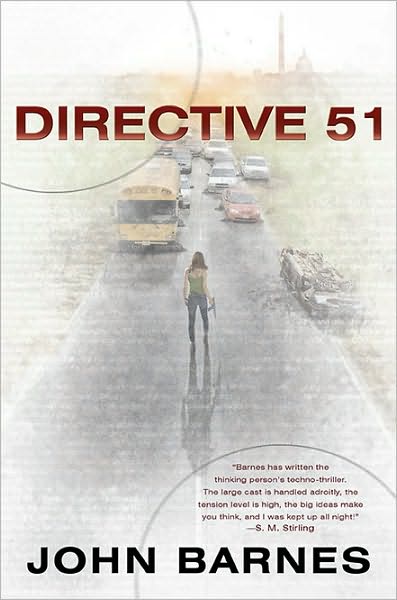 The novel takes place in the near future of the United States of America. Technology has advanced especially in the area of nanotechnology, where even students become capable of creating nanites (nanobots) in their home lab.

The "Daybreak" is a terrorist organisation devoted to bring down the "Big System". It consists of several groups (from radical ecological to radical islamists) which only share their disgust for the status quo.

It is introduced as a meme that has reached a critical mass. But the author also casts some doubts on that assumption.

The Daybreak is surprisingly effective in creating a nanoplague (self-replicating nanites) devouring petroleum-based fuels, rubber, plastics and several metals. But it also has a new type of nuclear bomb at its disposal.

This and some other facts create the impression that "Daybreak" is not what it seems. The riddle is not resolved in this book.

The larger part of the novel is about the executive power trying to fight back and within itself. As one may assume from the title, the original president and his vice-president are not around for long. And even with the end of the world close by, there are enough remains to squabble for. The failure of the leaderships encourages other to claim power for themselves. Only a few, the heroes of the book, are trying hard to hold it all together.

The book starts with a fast, gripping pace, a doomsday plot at its best. When it comes to the political side and dealing with the fallout, the novel remains more interesting than senate proceedings but requires some stamina on the reader side. The amount of characters is confusing (we go through four presidents alone) and even at the end, the purpose of some characters remain unclear.

I have the followup novels on my reading list, but they are not as high prioritized as they would have been after the first third.

You find this novel on Amazon,
Posted by Martin Seeger at 18:29