I seem to be in for debut novels currently. Here is another one of a new author. At 22 years, Samantha Shannon is one of the youngest writers i have in my current portfolio (aka Kindle) and it does not require much scrying to see a lot of read-worthy books coming from her in the next years. 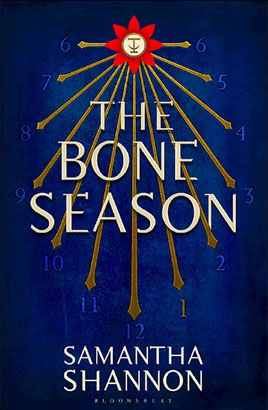 It is 2059 and not a good type to be magically gifted (or voyant as it is called here). The use of your talent is highly illegal and if you are caught, death will be your fate. So better keep your abilities hidden from everyone, even your only close family member. The best way to make a living is to join the syndicate and pursue a life of crime.

Paige Mahoney is not a happy but a content person when she is introduced. She feels safe within her environment. Her boss sees a lot of potential in her, more than she thinks she has. Her talent is a rare one as she can enter the minds of other people.

Her talent is put to a test when she is cornered by hunters of the Scion, the fascist, anti-voyant regime that has taken over England. While she manages to escape at first by using her power to kill, she is caught soon after.

To her own surprise, she is not executed but shipped to the Gulag of her 21st century: Oxford (or "Sheol I" as it is now called.) The prison is not run by professors but near-human creatures called Rephaim. The rules of her life change dramatically.

Until that point the reader has not even finished half the book. Samantha not only fervently builds a world but also a huge vocabulary. Dreamwalker, floxy, rotties, mime-crime, flux, NVD are just a few examples of (i would guess) a low three digit number.

It takes quite some learning from the reader and the complexity sometimes does not help but hinder the story development. On the other hand there are sequences where you are literally fleeing at her side over the roofs of London and really feel the breath of her pursuers in your own neck. In those action packed sequences she is at her best.

Another, easily forgiven, weakness is the language which feels to be stuck between the young adult and adult style. I expect this point to solve itself automagically during the sequels.

The overall construction of the story is solid and she even plays the reader by what seems to be plot device at first glance and turns out to be an important story element later in the book. I awarded bonus points for cheekiness here.

The book came to me highly praised through one of my wife's many magazines. While it did not fully live up to the (admittedly high) expectations, i am still impressed by an early work like this. You'll find it on Amazon.
Posted by Martin Seeger at 23:06