Smoke detectors have been an annoyance to me since from the first time we met. They go off without warning (i had dozens of false alarms already) and they tend to run out off battery typically at 2 a.m. in the morning. In later case, they give off that "click" sound every ten minutes which you (sleep deprived) can't locate. That entices you to disable all of them. On the other hand, they are cheap life savers. Well, the Nest fixes the cheap price but maintains a lot of the existing problems.

The Nest Protect smoke and carbon monoxide detector does not really fix the problems mentioned above but takes care of the "cheap" attribute. It combines a more stylish approach together with WIFI, an easy user interface and voice output. Steve Jobs lessons have clearly fallen onto some fertile ground. Also a nice touch (without touching) has been disabling the alarm by waving you hand close to the Nest Protect. But this very useful feature has been removed lately. 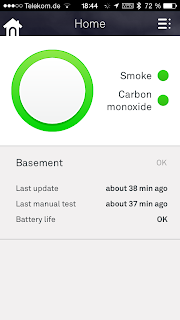 The setup is done through a mobile phone (Android or iPhone required). This is a very easy procedure, it only took a short time till the setup WLAN became visible. After that, everything went as smooth as in the demo video.

You need to setup an account with Nest Labs. Beyond voice and alarm output, the Nest Protect only talks to its home base by IP. There is no documented API or local interface. The information in the cloud is accessible by Web UI or the app on the mobile phone (see screenshot to the left). The actions you can take through the app or the Web UI are limited. You can only specify the location and configure minor options (like enabling a nightlight if someone moves in the dark close to the Nest). Really important features like disabling a Nest are missing.

I usually fix Smoke Detectors with Magnetolink. My mechanical skills are nothing to write home about (Screw you, you screws!), so i prefer to glue things. The Nest Protect is significantly heavier (372g for the battery version) than the usual smoke detector. So i will need someone capable operating a drill machine successfully four  times in a row to create a safer connection to the ceiling. With a price tag of 129 US$ (without shipping an import tariffs in Germany) it is a bit too valuable to conduct gravity tests.

It is at this time not officially available in Germany, but Borderlinx helps you to work around that. Therefor it is no surprise that the output language can only be set to English or Spanish yet. Furthermore the wired versions currently only supports 110V. Since only few people will take the effort to extend their power lines to every Smoke Detector, the later will not really matter. The battery version takes six Energizer Ultimate Lithium AA batteries to operate which accounts for a significant part of the weight. I cannot tell anything about the battery lifetime yet, i will update this blog article once i have run through the first battery set.

One of the theoretical strengths of the device is a pre-alarm stage where the device notifies you that the levels of Smoke or Carbon Monoxide are closing on the threshold. This may save you from some embarrassing panic action. Also it differentiates between both alarms. Also it has ways to signal its status through a colored LED ring. In reality the Smoke detector cooks off with a false alarm as spontaneous as its 5$ counterpart and is even more bothersome to disable.

Another issue i have with the Nest Protect is the lack of any kind of API. I can live with the lack of a local interface (though i would prefer one), no API will keep me from purchasing more of them for the time being. Perhaps Nest Labs believes that it is my ultimate goal to use 20 different apps to monitor everything in my house. Well, it surely isn't. I want the information integrated into a central monitoring even if it takes a rather complicated way (e.g. like with the Twine).

The device does a lot of things right:
And it is clearly a technological step up from the typical smoke detector.

But as clearly, it is not perfect yet:
Especially the first bullet point is a no-go in a cloud based device where such interface should be a cheap feature to add. Until now there is only a vague promise of a developer program for the next year.

Today i got a false alarm from my Nest Protect. And i have to say, Nest has completely botched it. There is no way to deactivate a false alarm other than:
Imagine doing this in the middle of a night woken from deep sleep. This is nearly as dangerous as a real fire.

I think this is completely insane. What is purpose to have a Smoke Detector with WIFI other than deactivate a false alarm? Together with battery warning this is the primary use case. I am really disappointed.

The support refuses to answer my question ("How do i disable a false alarm without risking my neck?") and answers one i did not ask ("How do i clean my Nest Protect?").

The false alarm also killed the battery of all remaining Nest Protect devices. So the battery lifetime is now "Four months and a false alarm."
Posted by Martin Seeger at 20:10