If you run out of authors

I know it is unlikely, but i have heard distant rumors about people running out of ideas what or whom to read in the Science Fiction and Fantasy genre. Don't blame me, i am just a messenger. But, rejoice, as usual there is a solution on the Internet.

Just go to Gnooks, enter three authors you like and you get recommendations you may like too. In my case, already the first recommendation was head on and it was an author i read a lot from and i liked a lot.

But it also offered further recommendations. It works best when you use not too dissimilar authors, like

You not only get one result, but the tool also offers a map of authors who are liked by the same people as the others close by.

Interestingly, some of the authors were already suggested to me by others based on my praise of others. The site also offers the same service for movies and music. At least for movies (about music i am not capable of judging) the service gives similarly credible recommendations.

The collection of known authors is far from complete. E.g. I missed Daniel Suarez when i was looking for my favorite Science Fiction writers.
Posted by Martin Seeger at 23:05 No comments:

Email ThisBlogThis!Share to TwitterShare to FacebookShare to Pinterest
Labels: Books

Rule Britannia, Britannia rules the Space! It's the 18th century and the Royal navy with their wooden hulls and iron men is the primary power in space. Second Lt. Thomas Weatherby sets out on the HMS Daedalus to blockade the rebellious colony on Ganymede who challenges the empire. Meanwhile in another dimension, Lt. Shaila Jain of the Joint Space Command stationed on Mars in the year 2132 has the first in a series of bad days when mysterious quakes threaten the geological surveys of a cave and the lucrative mining operation. 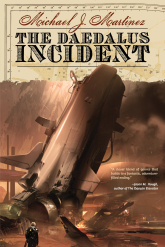 Yep, you read correctly. Wooden sail-ships cross the empty space between the planets in the 18th century. Thanks to alchemy, they can keep air and gravity. Battles are still fought by shooting round shots at spitting distance though and humans settle on other planets and moons, sometimes encountering natives living there.

The HMS Daedalus has to deviate it's course when they encounter a french privateer, a murder and a renegade alchemist with a very sinister purpose. Luckily for Weatherby they pick up a female household member of the victim, so his education gains an additional angle. In best tradition of C.S. Forrester, Weatherby has to rise up to meet the standards of his beloved captain and navy.

Joint Space Command Lt. Shaila Jain has different problems. Her career dead-lined after being the sole survivor of a disastrous expedition, she is in charge of the safety of the Mars station in the 22nd century. And the safety becomes an issue once the first quakes start on a planet with no tectonic activity at all.

In the rubble of the cave she finds the 300 year old diary of a British officer whose experiences don't match the teachings her history classes. Little time there is to study it since she has to deal with sulky miners, corporate interest and the help weeks away. But study she must as the situation turns from strange over to worrying and outright terrifying when things go south.

This books offers two timelines where the reader starts with the conviction, that the author will never manage to intertwine those two. But he manages and some fun for the reader beside it. Not the usual space opera but a good read anyway. There are a lot of surprises and turns in the story and the question "What the hell is Michael J. Martinez smoking?" subsides... a bit at least.

Seemingly classic characters in a well written but unusual story prove a lot fun. I recommend to pick up this book on Amazon.
Posted by Martin Seeger at 20:11 No comments:

This watch could be a game changer like the iPhone was. But currently it isn't and it may never come to it. If you look at it through the eyes of an engineer in the Internet area, opportunities for applications keep popping up in head every five minutes. Unluckily, they are currently still confined to that location.

The Pebble Watch was one of the first projects i backed in April 2012 on Kickstarter. It sold itself to me within seconds. Of all the projects i have backed, this is the one to have the deepest impact on my daily life. A lot of people thought so, with nearly 70.000 backers and over 10 million US$ collected, it was one of the first mega-sellers on the Kickstarter platform. 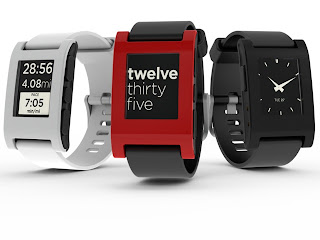 It turned out to be rather complicated to get mine. It should have been shipped in September 2012. The project was delayed (not unexpected), i made a mistake by (initially) choosing a colored one and living in Germany made it even more complicated.

The next mistake on my side was trying to re-route it through the UK, but the Royal Mail foiled that attempt by incompetence. So it took until August 2013 until my Pebble arrived.

At least in the U.S. it seems to be straightforward easy to get one now. The price is 150$ on Amazon.com for the black version. Availability in Europe seems to be still spotty at best.


State of the project

One would expect that this has given the project a lot of hone firmware and the software around it. In this regard, the status upon arrival was a disappointment. The smartwatch felt essentially restricted to email/sms notifications and exchangeable watch-faces. But the Pebble project was only partially to blame since several constraints were in reality caused by the iPhone with which the Pebble was peered.

This changed with IOS 7 and a new firmware & SDK in early November. Since then, a lot more things are possible that were previously just out of reach. Especially the capability to get every notification on the watch was a huge improvement.

There are third party apps for the Pebble, but the number is far below my expectations. Only watch faces are implemented in abundance. I don't have the impression that third party developers are earning money, the scene seems to be dominated by enthusiasts.

So, do i use the Pebble? The answer is Yes. So what does it do correctly? Well, they applied the KISS principle correctly:


What applications do i use the Pebble for?
But that's it, at least currently. Additional apps for the pebble like a step and distance counter are nice gimmicks but do not provide real value-add. Changing the watch-faces is nice to show off but my eyes are worn out by years of binge reading prefer the biggest digits possible to be used. Nice: the accelerometer is used to turn on the background light when you shake your wrist.

There are only a few hard technical points:
But the thing that prevents the Pebble currently from becoming "The Next Big Thing" is the lack of 110% engineering Steve Jobs has installed at Apple. There are a lot of small issues where the designers settled for 90% as good enough. An example is the magnetic connector for charging the Pebble which disconnects too easily.

I don't know the technical restrictions inherently burred in the Bluetooth stack, but i would have put a lot of effort into the capability of maintaining connections to several other devices at the same time. But that leads to the next chapter.

When i look at the Pebble, possible applications spring to my mind. Just two examples:
I am not sure if the Pebble will manage to achieve its gigantic potential. Samsung has botched (admirable completely) their attempt at a Smartwatch. But soon someone will without doubt perform a SWOT analysis on the Pebble and incorporate the result in their products. At best, the makers of the Pebble have a year to achieve their own breakthrough.
Posted by Martin Seeger at 22:50 No comments: